A LEGACY OF FAITHFULNESS 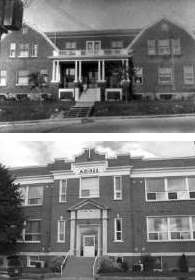 THE HISTORY OF GREENWOOD BAPTIST

Fellowship Baptist Church, North Bay, was established in January 1957 after a group of local Christians decided to pioneer a new evangelical fellowship in the city. Originally meeting at the home of Mr. and Mrs. Reg Macey at 1449 Pinegrove Crescent, the congregation affiliated with the Fellowship of Evangelical Baptist Churches in Canada and called Pastor William Hiltz of Langstaff Baptist Church, York County, to serve as the first pastor.

With the arrival of Pastor Hiltz in April 1957, meetings were moved to the Manor Hotel on Algonquin Avenue and then the McPhail Street School.  Land was purchased on Jane Street for a church building, but resistance from city hall led the congregation to sell the property and continue to seek the Lord's guidance for a building site.

The Lord blessed the endeavours of His people under Pastor Hiltz' energetic ministry.  A Sunday morning radio broadcast on CFCH AM was begun, which helped reach many in the city for Christ and Pastor Hiltz and church members carried out an active visitation and community outreach program.

In the spring of 1958, a number of members from Grace Baptist Church, an evangelical church in North Bay that had disbanded were received into fellowship. 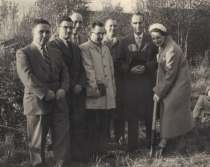 Early in the same year, the congregation launched a campaign for a one-story building at 312 Greenwood Avenue.  While the door had been closed on the Jane Street project, suitable building lots were secured on Greenwood Avenue, which at the time was located in the Township of Widdifield.   Building permits were issued by the township office, and under the leadership of Mr. Edmund Beilhartz, a member of the church and respected local builder, the building was ready by early September 1958.  A dedication service was held on October 20 with Pastor Robert Brackstone of Chatham as guest speaker.  Funding for the new $25,000 building was secured with a loan from the Fellowship Minute Man fund, a commercial loan and the sacrificial giving of the congregation.

During the late-50s, a weekly Sunday School mission at Tweedsmuir Public School in West Ferris was established. Mr. David Whitney, a local realtor, was active with the West Ferris outreach and helped spearhead the local Christian businessmen association and Gideon's camp.  The Sunday School work also benefited from the active participation of many North Bay Normal School students.  The Normal School, or teachers' college as it later became known, drew young men and women from across the North.  Many visiting students were active with the church's Sunday School ministry during their time in North Bay.

In spring 1960, with the Lord blessing the work in North Bay, Pastor Hiltz' left to pursue graduate studies in Texas.  In October 1960, he was succeeded by Pastor Denzill Raymer.  In addition to preaching and community outreach, Pastor Raymer also gave his attention to expanding the church facilities.  Mr. Elmer Perkins chaired the building committee as plans were drawn up to construct a super-structure on the original building.

The Lord graciously led the church to the M-P Foundation, which at the time was commencing a program of lending financial assistance to missionary minded congregations who needed new buildings.  In exchange for an interest free loan, the church would repay the loan in the form of missionary support. Through the generosity of the M-P Foundation benefactors, the church building was constructed in 1962 and over $120,000 contributed by the church to missions.
Dedication services for the new building were held in November 1962, with Dr. SL Boehmer as guest speaker.

Bolstered by the enlarged facilities and Pastor Raymer's leadership, the outreach of the church extended to include such endeavours as Sky Teens, Pioneer Girls and choral activities.  A rapid expansion in the Sunday School was experienced at this time and a mission Sunday School was started in the Lakeheights area of the city.  Missions were a strong emphasis during Pastor Raymer's time.  The congregation was able to support many missionaries over the years, including Roy and Frances Wallace who served in Africa.

During much of Pastor Raymer's ministry he journeyed to Toronto weekly to perform teaching duties at Central Baptist Seminary.  Eventually, the time came when he felt led to full-time teaching position at the seminary, and he resigned as pastor in the fall of 1966.

A period of ten months passed before the congregation was to enjoy the ministry of a full-time pastor.  The church carried on its ministries during the vacancy, with local men from the congregation and guest speakers providing pulpit supply.  Mr. Clare English, then a student pastor, also ministered during a six-week placement.

The church called Pastor Harold Edwards in spring 1967, but due to immigration difficulties his arrival from Corning, New York was delayed until that August.

Pastor Edwards provided leadership in his unassuming and gracious manner for about two years.  A church organ was purchased during the early months of his pastorate.  Because of his musical talents, he was able to augment his preaching ministry with vocal solos and selections on a variety of instruments. A radio program was introduced for a time, which along with other elements of the church's outreach, proved helpful in reaching and influencing many lives in the community for Christ.

A new era began in January 1970 with the calling of Pastor Bruce Amy.  Semi-annual rallies with other regional Fellowship churches were initiated and a bus ministry was started, with children who formerly attended the Lakeheights Sunday School mission transported to Greenwood Avenue.  In fall 1977, Pastor Amy's son James was appointed Youth Pastor.  With the church in transition, Pastor Amy was called to West Toronto Baptist Church in November 1979.

Mr. Jim Pride, a member of the congregation and ordained minister, served as Interim Pastor during the following year, providing strong preaching and leadership as the church united together to carry on the Lord's work on Greenwood Avenue.

In November 1980, Pastor Stephen Hamburger was called to the church.  In 1981, the church began sponsoring a student pastor during the summer months to strengthen community outreach activities.  The church also renewed its emphasis on missions, with the commissioning of John and Pauline McAughney to Senegal.  Pastor Hamburger sought to strengthen ties with other Fellowship churches in the region, and evangelical churches in North Bay as he chaired a Barry Moore Crusade in spring 1988.

Throughout the years, the church maintained an active desire to support home missions as well.  This has included Bonnie Bale, who served with the Canadian Sunday School Mission and then Northern Christian Counselling Services in Sault Ste. Marie and Shirley Glass with Galilean Bible Camp.  Both have since retired from the field, and Shirley has returned home to North Bay.

In spring 1987, Bill and Matilda Hookway, long-time residents of North Bay and members of Fellowship Baptist, graciously donated their estate to the church.  The Hookway property was later sold in 1990 to purchase lots on Elmwood Avenue adjacent to the church.  The Elmwood lots were later sold to fund improvements to the church, with the remaining proceeds designated for future building expansion.

The 1990s were a time of transition at Fellowship Baptist.  In 1994, Pastor Hamburger moved on to ministry opportunities in southern Ontario.  The same year Tim Hawman, who had come to Fellowship Baptist as Youth Pastor in 1989, was appointed Interim Pastor before being called as Senior Pastor in 1995.

The congregation also changed its name during this period to Greenwood Avenue Baptist Church and adopted a new governance model, which emphasized a plurality of elders.  Jim Pride, who served as Interim Pastor of the church in the late-1970s, was elected as an elder and served alongside Pastor Hawman until 2004.  In 2006, Paul Church began serving as an elder, helping to expand congregational care and pastoral oversight.

Increased attendance and the need to provide increased accessibility to church ministries led the congregation to begin a building expansion in September 2008.  During construction, the congregation was warmly welcomed at Calvary Pentecostal Temple where we met for services in the afternoon.

Construction on Greenwood Avenue was completed in June 2009, adding 2,000 square feet to the building, with a wheelchair lift, barrier free washrooms, a new pastor's study and a larger sanctuary, fellowship hall and nursery.  The focus had not been on a building, but on the means to expand ministry opportunities in our community.
In early 2013, Greenwood Baptist Church was made aware of the possibility of purchasing a recently closed school building in the city. The move would provide additional space for children's ministry and ample parking.
The church sold the house at the corner of Greenwood and Beattie that it had purchased a few years earlier for office space in May 2013, and took possession of the old Sainte-Anne school building at 235 Albert Avenue in June 2013.